BlogApple Mac NewsTidal Accuses Apple of Blocking Drake Benefit Stream, but Not According to Drake 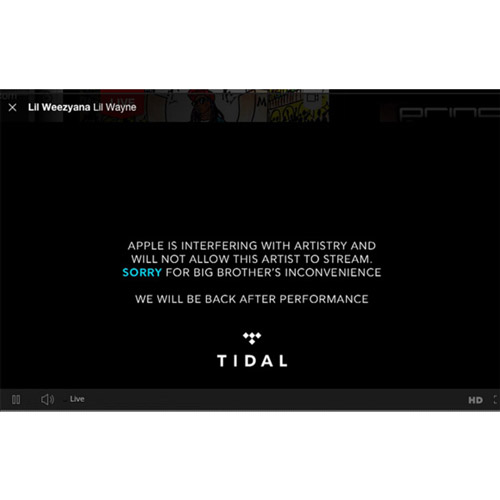 Dueling narratives have taken shape around Drake’s appearance at a benefit for victims of the Katrina hurricane disaster of 2005. Tidal claimed Apple prevented it from streaming Drake’s performance, but Drake’s management said that’s not the case. As with most things, the truth most likely lies in the vast middle ground, and Bryan Chaffin offers his thoughts on what really happened….

Dueling narratives have taken shape around Drake’s appearance at a benefit for victims of the Katrina hurricane disaster of 2005. Tidal claimed Apple prevented it from streaming Drake’s performance, but Drake’s management said that’s not the case. As with most things, the truth most likely lies in the vast middle ground, but Apple isn’t commenting.

The story began with Lil Weezyana Fest, a benefit for Tha Carter Fund, a charity managed by the Greater New Orleans Foundation. The Fest was part of the memorial events organized around the 10th anniversary of the Katrina hurricane disaster.

Tidal, a streaming music service owned by Hip Hop mogul Jay-Z and other big-name artists, streamed the event, but claimed Apple was blocking the company from streaming Drake’s performance.

1/2 Apple is interfering with artistry and will not allow this artist to stream. Sorry for Big Brother’s inconvenience.

The New York Post capitalized on Tidal’s tweet by publishing a story titled “Drake sings for Katrina victims, Apple threatens $20M suit.” The story generated a telegram from 1902, which demanded The Post give back its yellow journalism.

He Said, He Said

At the heart of the claim is a US$19 million exclusivity deal Drake signed with Apple Music. Citing an unnamed source, The Post intimated—but didn’t state—that Apple threatened legal action against Tidal if it streamed Drake’s performance based on that exclusivity deal. From The Post‘s story:

Legal letters have been sent to Tidal warning that Drake cannot appear on the Tidal stream of the festival, either solo or part of a group, and if the warning was ignored, the liabilities could be up to $20 million. This event is for charity, Drake is doing two songs.

Why does Apple think it can dictate to artists where and when they can perform? 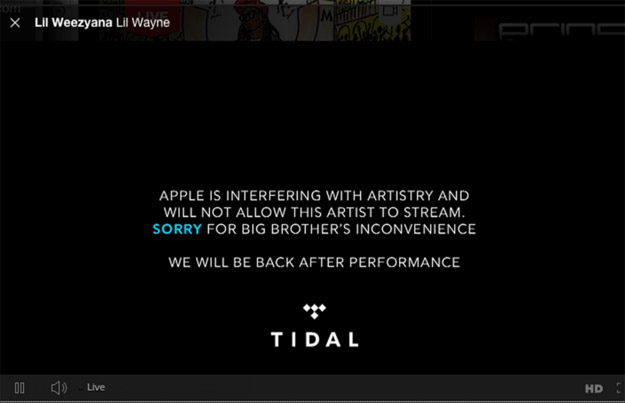 It turns out Apple might not actually be dictating any such thing. Over the weekend, Buzzfeed‘s John Paczkowski reported that Apple was not responsible. His named source was Drake’s management, which said it pulled Drake’s performance over concerns about the quality of stream. From that story:

The decision to not have Drake participate in the Tidal steam has nothing to do with Apple or Drake’s deal. Point blank, 100%. I made a business decision. Apple doesn’t have the power to stop us from being part of a live stream. The only people that have the power to do that are Cash Money and Universal, and they’re our partners.

Drake manager DJ Future the Prince added, “I don’t understand. If you’re going to say something about the situation publicly, you should tell the truth. They saw the opportunity to take a situation and spin it in their favor as a publicity stunt.”

With Apple not commenting on the story, we have two self-serving narratives here. On the one side, Tidal claims Apple stopped the Drake stream. On the other, we have Drake’s management claiming that it stopped the stream out of concern about quality.

Note that one of Tidal’s stated raisons d’êtreis quality streaming, making that claim a slap in the face for Tidal.

Here’s my guess: Drake’s management pulled the stream out of concern over its streaming exclusivity contract with Apple. It would be utterly bizarre for Tidal to make up a threat from Apple out of whole cloth. Instead, the “threat” was most likely Drake’s management citing its contract and the penalties for violating that contract when discussing the issue with Tidal.

Tidal then spun the event to paint its competitor and eventual destroyer in as bad a light as possible.

Apple may or may not have been involved in the whole thing, but it’s not hard to imagine that Apple would have happily given Drake an exemption for this charity event had it been asked. One way or another, when Tidal chose to make Apple the bad guy, Drake’s management stepped up to claim responsibility using concerns over streaming quality as a cover.

That’s just my best guess, of course, but dollars to donuts says that’s what really happened. It would be kind of awesome if Apple would clear it up, but that doesn’t seem likely. In the meanwhile, the whole thing isn’t likely to help Tidal any more than it hurt Apple Music. This is not the East Coast/West Coast battle of 2015.