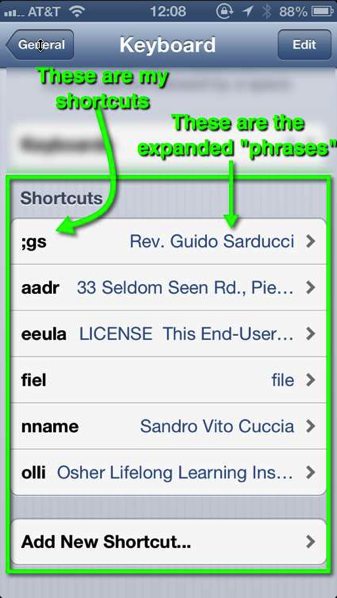 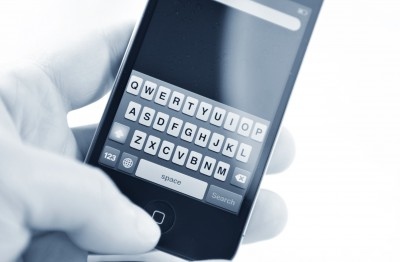 You want to save time and avoid frustration when typing on your iPhone, iPad or iPod touch, don't you? Sandro Cuccia shows you where and how to enable various aspects of text entry automation on your iDevice.

The computer was originally invented to relieve all of us from the drudgery of repetitious and mindless actions, clearing the way for the realization of our more lofty goals. Clearly, this remains true to this day. Our iOS devices, being quite powerful portable computers, are able to make things easier for us through the automation of all kinds of tasks.

In this article, we look at text automation on your iPad, iPhone and iPod touch. On these devices, we find that any kind of text automation is desirable, not only because it removes the tedium of typing the same things over and over again, but also for its assistive nature in that, for many adults it’s frequently problematic to type whole words and sentences on the small keyboards without going mad.

In my articles, I like to show readers how to do a number of things without needing to purchase third-party software. Indeed, there are many powerful tools available built into both iOS and OS X that many are not aware of. The biggest reason for this, of course, is that Apple doesn’t really advertise most of these features. Yet, full documentation and help for all the features is available by downloading the appropriate manual in PDF format from the Apple support site.

In the area of text automation, the one third-party app that stands out is TextExpander touch. This is a highly useful app that lets you type more with less effort on your iPhone or iPad. You create custom keyboard shortcuts into frequently-used “text snippets.” You can also synchronize with text snippets residing on your Mac. When you type your shortcut in any iOS app that supports TextExpander functionality, your shortcut will expand into  the snippet – as if you typed it – no matter how long the snippet is.

If you want to explore the possibilities without purchasing third-party keyboard shortcut apps, why not take a look at what iOS itself has to offer you – all built-in and available, as long as you know where to go to find and configure it.

In iOS, text expansion functionality is called Keyboard Shortcuts. To configure your shortcuts, you have to dive down into the bowels of iOS. (Yes, iOS does indeed have bowels). Go to Settings > General > Keyboard.

You can have as many Shortcuts as you want. Each phrase can be as long as needed.

Looking towards the bottom of the Keyboard Preferences pane, you see a list of any existing shortcuts. You should find the list pre-populated with a couple of shortcuts for you to get started in building your own library of shortcuts. The fun begins at the very bottom, where you can tap on Add New Shortcut. Let’s try this out.

Before getting started, you should know that the iOS Keyboard Shortcut feature is very, very basic. Unlike an app like TextExpander, where it features a whole collection of rich features and formatting options, in iOS you can create text snippets of any length, but your shortcuts will generate your words in plain text only. This means no text formatting, no graphics, and no carriage returns. This may be a deal-breaker for you, as it is for me for the most part. Nevertheless, the Keyboard Shortcuts feature in iOS does have it’s uses. One advantage is that the shortcuts are available system-wide on the device. The shortcuts expand within any app, as long as it accepts keyboard input.

Here’s something simple for you to try: create a shortcut that will expand and type out your mailing (snail-mail) address. Start by tapping on Add New Shortcut in the Keyboard Preferences pane. Then, in the Shortcut pane, type your address in the Phrase field. Next, for the actual shortcut, you need to type a memorable and short combination of letters, numbers, and/or special characters. In this instance, my shortcut is aadr. I spell it this way because it’s unlikely that this particular combination of letters will ever be typed otherwise. When done, tap the Save button at the top. Your shortcut is then added to the main list. 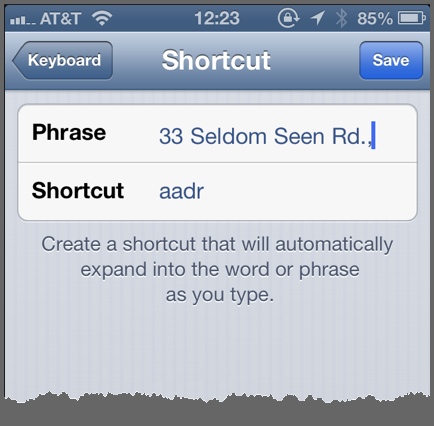 The Phrase can be as long as you need, but no formatting or carriage returns allowed.

If you need to edit any aspect of your shortcut later on, simply tap on it in the Shortcuts list and edit away. You can also manage your shortcuts by tapping on the Edit key at the top of the Keyboard Preferences pane.

OK, let’s go ahead and try out our address shortcut. Open any app that will accept keyboard input. For illustration, I am using the Notes app to draft a letter to an iPhone case vendor. 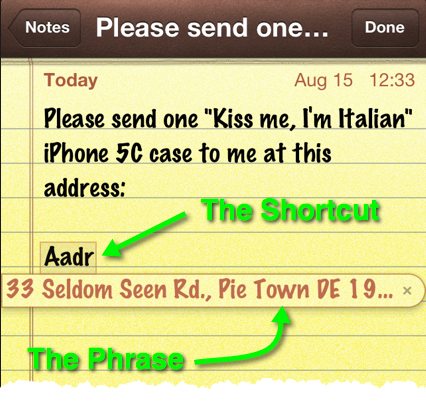 An Auto-Correction bubble appears, showing the phrase assigned to the shortcut.

When your cursor is at the spot where you want your Phrase to appear, type your shortcut. Case doesn’t matter here. You will see a pop-up similar to what the spell-checker/auto-fill mechanism produces. You can reject the suggestion by tapping on the “x” in the bubble, or you simply type a space, a return, or punctuation mark to accept the suggestion. It’s always quite stimulating to see your phrase just appear! (Hey! Simple thrills for a simple mind.)

Additionally, what really works well for me are shortcuts that immediately fix my commonly misspelled words. For example, when I want to type the word “file,” I always seem to type “fiel” instead. Yes, the built-in spell-check system can pick it up, but this just seems to work better for me.

Here’s another of my own examples which may spark an idea in you: one of the venues where I teach has a very long name. In any official correspondence as a representative of this organization, I am required to use its complete name consisting of eleven long words. So, I type my shortcut, “olli”, which expands to “Osher Lifelong Learning Institute at the University of Delaware in Wilmington.” Believe me, when I used to type all that long-hand – well… the angst was palpable!

As a final word on keyboard shortcuts, here’s a little tip: you can prevent your iDevice from trying to correct a certain word or phrase. Do this by creating a keyboard shortcut, entering the word in the Phrase field, but leaving the Shortcut field blank.

There are other features in iOS that help automate your typing. Of course, there is dictation, which for me, actually works remarkably well. This is available on iPhone 4S or later and iPad (3rd Generation) or later.

To use dictation, Siri must be turned on via Settings > General > Siri. You must have an internet connection (Wi-Fi or cellular data) because the digitization of your spoken text actually happens on Apple online servers. In looking ahead to future iOS versions, there appear to be some hints deep in the iOS 7 code that Apple may introduce offline dictation. I’m not holding my breath, though, as Apple often likes to play with new technology, yet never implement it. 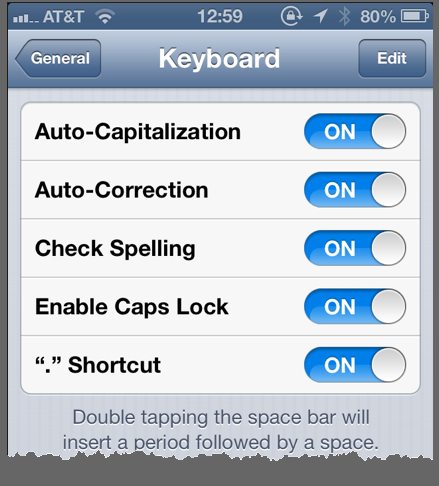 Auto-Capitalization: Enabling this will automatically capitalize the first letter of a sentence as you type.

Auto-Correction: For many languages, your iDevice uses the active dictionary to correct misspellings or make suggestions as you type. When a word or phrase is suggested, you can accept the suggestion without interrupting your typing. As already discussed in the section above on Keyboard Shortcuts, when you see the suggestion bubble, to accept it, type a space, a return character or a punctuation mark. To reject a suggestion, tap the “x” next to the suggested text.

Check Spelling: Any misspelled words that you have typed will be underlined in red. Tap the underlined word, then tap the correct spelling. If the word you want doesn’t appear, just retype it. Contrast the Check Spelling feature with Auto-Correction – the latter correcting your spelling errors as you type. 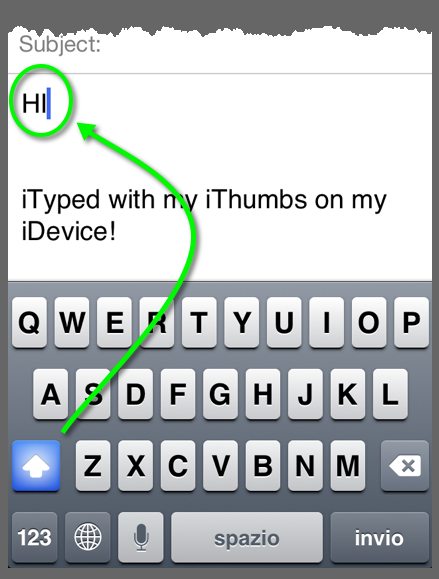 Double-tap the Shift key to enable Caps-Lock mode, indicated by the solid blue.

“.” Shortcut: As explained directly beneath this control, double tapping the space bar will insert a period followed by a space. This is just another way that text automation helps you type fast on your iOS keyboard, and with minimal frustration.

It kind-of goes without saying… As time marches on, we find more and more examples where it becomes easier for the typical iDevice and Mac user to really bring out the true power of our devices through the automation of repetitive and complex tasks. Anything that helps reduce physical typing – particularly on portable devices –  is a good thing, and Keyboard Shortcuts built-into iOS is something to really put to good use.