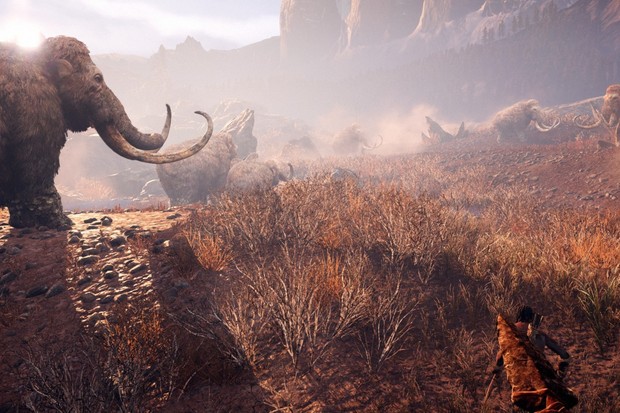 “Howdy, players! It’s time for another Far Cry! This year’s entry,   Primal , takes players to   the stone age   where they’ll take on the role of  Takkar, who is   literally a caveman. Brandishing an arsenal of    clubs, spears, bows and arrowsit’s up to Takkarto   fend off invading… 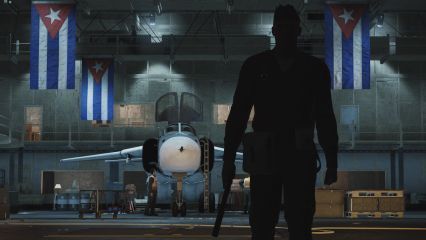 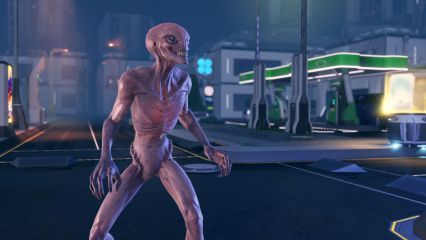 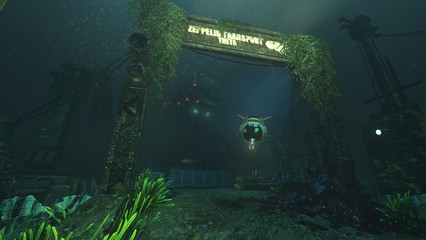 “Howdy, players! It’s time for another Far Cry! This year’s entry,   Primal , takes players to   the stone age   where they’ll take on the role of  Takkar, who is   literally a caveman. Brandishing an arsenal of    clubs, spears, bows and arrowsit’s up to Takkarto   fend off invading tribes and take back his homeland. Which, in player terms, is code for kill a lot of people, craft some items, and collect some unimportant doodads. The gimmick this time is   you can tame wild animals and make them fight people for you   which is   pretty exhilarating.

If this is your first Far Crygame,   it’s a good place to start . Otherwise, your enjoyment is probably dependent on   whether you can honestly stomach anotherFar Cryright now  .”

Once more unto the breach

Far Cry Primal takes us to the dawn of human civilization, to 10,000 B.C.E., when mammoths roamed the land and Egypt’s lofty pyramids were still seven thousand years in the future. You play as Takkar, a member of the Wenja tribe—a name which I’ve roughly translated to mean “We suck at fighting.” The Wenja are on the verge of extinction, mercilessly hunted down by two stronger tribes. Predictably, it falls to you to single-handedly drive the others from the lush Oros Valley and save the Wenja. 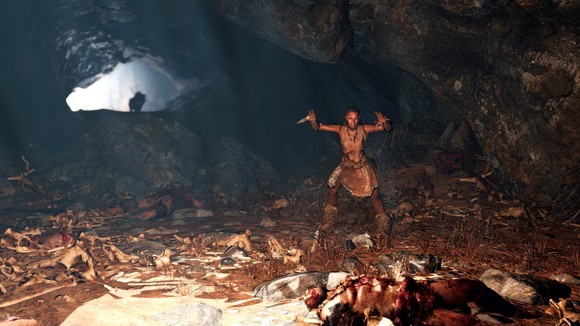 Not only is the setting excellent, but it’s the biggest risk Primaltakes. Spears and bows instead of guns! Saber-tooth tigers! Mammoths! People speaking some sort of guttural language! And uh…

Well, to be honest that’s kind of it. Like Far Cry 4 and Blood Dragonbefore that, this is just a repurposed Far Cry 3, an incredible idea squandered on the same handful of enthralling, but threadbare mechanics. A surface-level change that (barely) masks the copy/paste feel underneath. I joked in my Far Cry 4 review that it was “Far Cry 3 plus snow.” Primalis pretty much “Far Cry 4minus guns.”

Objectively, that’s not a bad thing. Objectively, Far Cry(at least in its modern incarnation) is an open-world theme park, with barely-controlled chaos in service of wanton murder and arson. It goes down easy. It’s mindless blockbuster, on a level with Just Cause for sheer absurdity. Plus you can now tame animals (lions and saber-toothed tigers and bears, oh my) to fight alongside you. 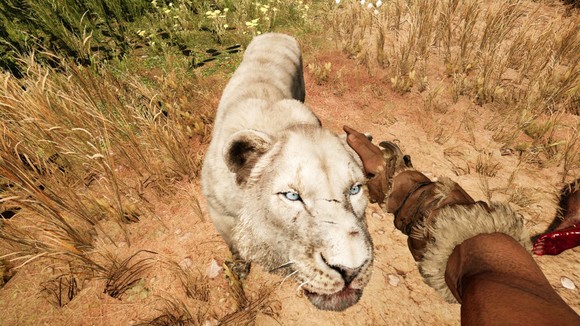 Combat as a whole benefits from the change of pace afforded by stripping the series down to the strung-together technology of 10,000 B.C.E. Primalis a tighter affair, a more dangerous game than any of its modern-era peers with their super-powered sniper rifles and guerrilla mobility. If you like explosions you’re out of luck, but personally I’ve wrung just as much enjoyment out of Primalby setting my menagerie loose on hundreds of enemies. It’s stupid and hardly historical, but by golly it’s fun.

There’s a nagging feeling though. “I’ve done this before.” Not just once but four times in four years. Step One: Look at the map. Step Two: Pick the nearest Outpost. Step Three: Kill everyone in the outpost. Step Four: Repeat. Far Cryis so formulaic, at this point even commenting on the fact feels stale.

Your only relief from the grind of clearing generic Far Crymap icons is the occasional Specialist Mission, given to you by slightly-less-generic Specialist villagers for little-to-no reward. “Kill some hunters with a mammoth.” “Collect feathers for this person.” “Go to this site and kill three guys.” “Kill everyone in this fort.” “Walk through another one of those increasingly-cliche drug hallucination missions.” 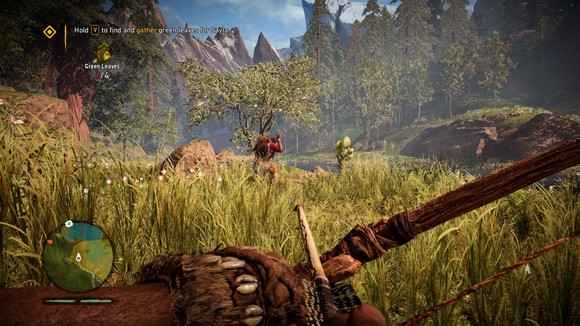 These are essentially the “story missions” in Far Cry Primal, though in any other game they’d be the stuff of optional side quests. You kill other tribes because that’s what you’re expected to do. The Wenja Tribe must survive because you’re a Wenja. Which is all well and good, but it’s not exactly a thrilling motivation when you’re seven hours in and collecting more flint to make more spears to go kill more of the other tribe.

What’s worse is I’ve actually lobbied for the non-linear narrative structure found in Primal. Player freedom is of tantamount importance in open-world games, and in part that means not railroading them through a story. Let them choose how to play. Make less of the game dependent on interlocking quests.

But in talking about non-linear narrative I also specified it would be incredibly difficult to pull off. You need to somehow keep players engaged with the story without relying on crutches like “They kidnapped my son/daughter!” or “The world is ending!” 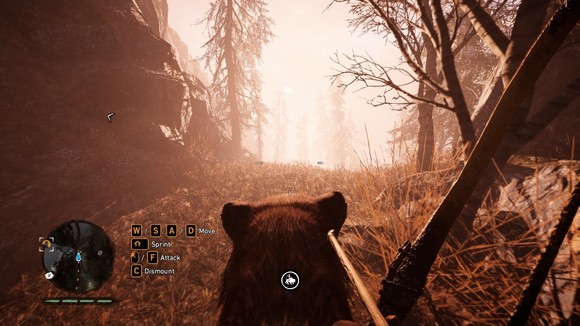 Primal simply isn’t compelling. I couldn’t name you a single character, nor describe what many of them do. I can’t really think of a standout mission. You go to places on the map because those places exist, regardless of whether there’s anything for you to do once you arrive. It’s just filler built on top of more filler.

Two things. 1) God forbid someone actually plays Far Cry Primal the way it’s “meant” to be played—a.k.a. with a mandatory two-second animation each time you search an object for crafting materials. When I realized I could disable those animations in the Options menu I nearly wept for joy. But, 2) Crafting is not deep or compelling enough to sustain Primal, and it’s directly at odds with Far Cry’s theme park ethos. Here’s a game that’s ostensibly about charging mammoths through stockades and lighting villages on fire and generally causing a ruckus. And then the game says “Out of ammo” and forces you to go collect sticks for five minutes. It’s like someone interrupted your birthday party to say “Hey, you’d better stop procrastinating on your taxes you big dummy.” 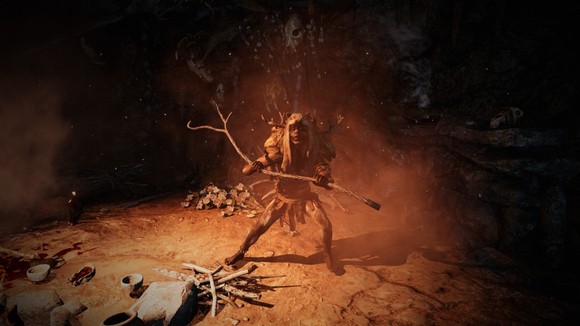 I hoped for better. I hoped Far Cry Primal would be to Far Cry 4 what Blood Dragonwas to Far Cry 3—that is to say, “the fun(ny) one.” Sliiiiightly more creative. A bit more humorous. A testament to why Ubisoft should give its properties room to experiment.

Instead, it’s Far Cry. Another in a long line of Far Crys, and this time without even the benefit of Blood Dragon’s crazy art style. Again we arrive at the conundrum that has plagued Ubisoft these past few years: Competent games that are built around some enthralling core mechanics, but have no spark.

Yearly releases are hurting good games. I don’t know what the sales data looks like, so I can’t speak to that claim from a financial perspective. I’m sure the backroom at Ubisoft has done the calculations and concluded that the number of consumers lost per year is offset by the amount of money made.

But I’m speaking from a critical perspective—from someone who’s played four Far Crys in four years, nine Assassin’s Creeds since 2007, a dozen Call of Dutys and a handful of Total Wars and a cadre of Civlizations and however many damn [Lego Pop Culture Icon] games. Hell, let’s throw in Telltale while we’re at it since the properties keep changing but the ideas don’t.

Formula is certainly part of the problem. It’s far more exciting—especially when your job is to play every game that releases—to see developers stretch, to see them push the bounds of the medium.

But oversaturation is a bigger issue. Familiarity breeds contempt, as they say. These games aren’t gone long enough for anyone to miss them, and the result is I’m more likely to say “Ugh, another one of those?” than “Oh wow, another one of those?!” Especially when the same handful of ideas are rehashed ad nauseum.

Take a year off, Far Cry. Let us miss you. Then at least when you retread the same ol’ game loop again for the inevitable Far Cry 5the burden of memory won’t weigh quite so heavy.